One Touch can change your life

Pink October is an annual campaign that takes place all over the world, as its name indicates, in October. Its intention is to alert society about the early diagnosis of breast cancer. In addition to diffusing preventive data and highlighting the importance of paying attention to your health, it searches for rights such as medical care and emotional support, guaranteeing a quality treatment.
During the month, several companies, people and institutions will approach the topic to encourage women to carry out their exams and much more, including them at their disposal. Initiatives like this one are fundamental for prevention, and in the first stages of the illness it is asymptomatic. 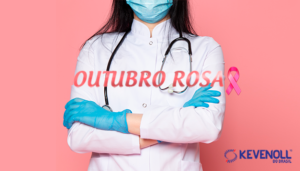 What is Breast Cancer? Is there a way to prevent it?

Without a doubt, it is the most common type of cancer in Brazilian women. In this disease, there is an abnormal development of breast cells, which multiply repeatedly until they form a malignant tumor, giving rise to breast cancer. If a person in the family – especially the mother, sister or daughter – had this disease before the age of 50, the woman is more likely to have it too. Anyone who has had breast cancer or ovarian/uterine cancer, at any age, should also pay attention. Women at higher risk of having breast cancer should take special care, having a clinical breast exam and a mammogram once a year from the age of 35 onwards. A healthy and balanced diet with fruits and vegetables, physical activity and no smoking. These are some tips that can help prevent various diseases, including cancer. How Pink October came about:
The movement began in 1990 at an event called “Run for a cure” that took place in New York to raise funds for research carried out by the Susan G. Komen Breast Cancer Foundation. The event took place without public or private institutions involved. As it grew, October was instituted as national awareness month in the US, until it spread to the rest of the world. The first action in Brazil took place in 2002, at Ibirapuera Park, in São Paulo. With pink lighting from the Obelisk Mausoleum to the Constitutionalist Soldier. As of 2008, initiatives like this have become increasingly frequent. Several organizations related to cancer began to light buildings and monuments, conveying the message: prevention is necessary.

The role of Kevenoll do Brasil in the fight against breast cancer:

Kevenoll do Brasil gloves are essential for maintaining the health and safety of patients and physicians when carrying out exams for the prevention of breast cancer. Are you also on the pink team? Tell us!